We have now been in Jordan for three months.  We’re still newbies and we still have a lot to discover and explore.  But we are starting to get the lay of the land and we are feeling more and more comfortable in our new home.  So, after just three months of observations, here are 10 Things We Love About Jordan (in no particular order):

1.  Weather:  Jordan has fantastic weather!  We have seen rain only twice since we arrived.  One of those rainstorms flooded our apartment, but that’s another story for another time.  Though it is early November, temperatures in the afternoons are still in the mid-70’s.  And the skies are always blue.  It looks like this pretty much all the time: 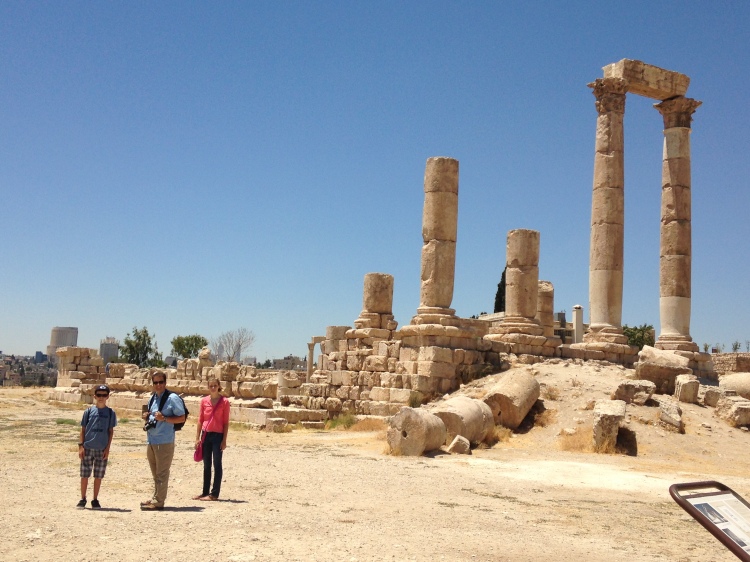 2.  Food:  I’ve said it before, and I’ll say it again:  The food is fantastic!  Hummus, falafel, shawarma, ful, knafeh, tabbouleh, flatbread and amazing, fresh produce.  Jordanians don’t use preservatives, so things go bad quickly.  So you gotta eat it fast.  Bread only lasts about 24 hours and produce begins to rot after about two days.  But while it’s fresh, it’s amazing!

3.  History:  Arab history, Palastinian history, Christian history, Greco-Roman history, Ottoman history, Hashemite history, Lawrence of Arabia, Six Day War, etc.  Jordan has a wealth of history to learn and study.  And ruins from many of the various historical periods are all over the place.

4.  Rolling Hills:  I grew up surrounded by the Rocky Mountains.  To me, mountains are like a huge security blanket.  I loved the mountains of Taipei.  We don’t have mountains here in Amman, but we do have rolling hills, the next best thing.  There is nothing more disconcerting to a mountain girl than looking out and seeing the curvature of the earth.  I appreciate the rolling hills of Amman.

6.  School:  There are a number of international schools in Amman.  Our kids attend American Community School of Amman.  It’s a great school.  It doesn’t have the reputation of the school we came from in Taipei, but it also doesn’t have the academic pressures.  We appreciate that!  ACS is a small international school, with a close, family feel.  On any given afternoon, I’ll find our superintendent, Larry McIlvain out directing traffic in front of the school.  Not many international school superintendents would do that.  I also appreciate my daughter’s Arabic teacher who didn’t throw her out of class today when she accidentally responded in Chinese to an Arabic question.  ACS has everything my kids need.  Not every State Department post has adequate schools, especially for high schoolers.  We are so grateful that our kids are able to attend a good school.

7.  Church:  The Mormon church was formally recognized by the Jordanian government in 1989, the first Arab country to do so.  The country has three branches (congregations) two of which are in Amman.  We attend the Amman 2 Branch which is conducted all in English.  We are a small branch, around 75 members, but we are strong.  In addition, every fall we have around 40 BYU students who are in Amman for a semester learning Arabic. Our district includes the countries of Jordan, Lebanon and Egypt.   I’m so grateful that we have a branch to meet our spiritual needs. 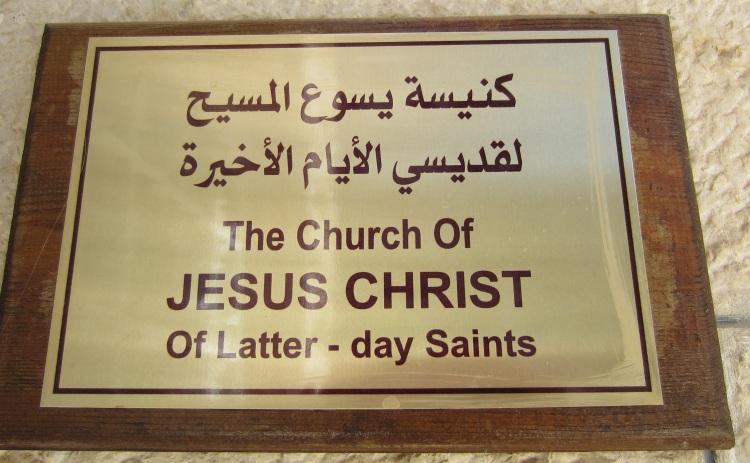 8.  Grocery Stores:  Amman has beautiful grocery stores, as nice as any I’ve been to in the US.  And they carry a lot of US products, which is a big deal to high maintenance Americans like ourselves.  The stores are clean and well organized.  This may seem like a small thing, but to the mom of a big family, a good grocery store is greatly appreciated!

9.  English Speakers:  Most people in Amman speak English, and speak it well.  I agree that it’s pathetic for Americans to go into a country and expect the citizens of that country to speak English.  After all, it’s their country, we should learn their language.  But here’s the thing, Americans are lazy.  We expect the world to speak English.  And I’m somewhat ashamed of that fact.  We are working on our Arabic, some more than others.  And we hope to become somewhat conversant about things like locations of bathrooms, menu items and general pleasantries.  As it stands, we are able to tell taxi drivers how to get to our apartment, and that’s about it.  But hopefully, we’ll improve on this one.

9 thoughts on “10 Things We Love About Jordan”