I live in a country of contrasts.  Jordan has some incredible wealth, but it also has some sobering poverty.  I realize, of course, that this is a sign of a third world country–wealth, poverty, but very little middle class.  However, I don’t really think of Jordan as third world–it seems to be more of an emerging nation.  I’ve been to some true third world countries, and Jordan doesn’t compare.

Nevertheless, Jordan has faced some serious setbacks recently.  In the past two years, almost 600,000 Syrian refugees have flooded across Jordan’s border to the north.  In a country with a population of only 8 million, 600,000 is a pretty substantial number.  Approximately 150,000 of those refugees live at Azraq camp in northern Jordan, making it the third largest city in the country.  The other 450,000 Syrians have spread out across the country.  These refugees have imposed an immense burden on Jordan.  But King Abdullah has compassionately refused to close his borders to these desperately needy people.

The Syrian refugees are now numbered among the poor of Jordan, which include Iraqi refugees, gypsies, Bedouin, Palestinians as well as poor Jordanians.  The contrast between the poor and the wealthy that I have observed in the past year of living here has been, at times, quite startling.

Then yesterday, Jason and I went for a walk in our neighborhood.  In a gully just three blocks from our apartment, we came across this camp, which we didn’t know existed previously: 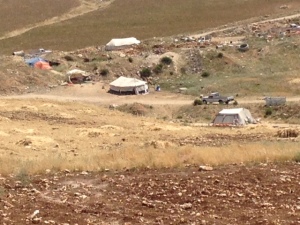 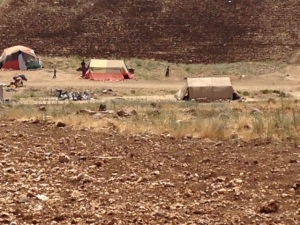 I’ve seen a number of camps like this one across Jordan, but I didn’t know one existed right in my neighborhood.  I’m not sure if these are Syrian refugees, Bedouin or gypsies. I suspect they are Syrians because many of the tents bear the UN logo common on tents donated to refugees by the United Nations High Commission for Refugees.

In contrast, just across the street from where I stood as I took the previous pictures was this row of new, luxury apartment buildings: 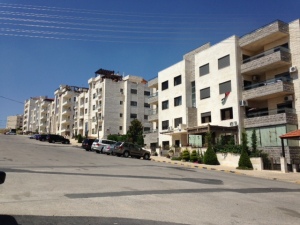 I think that the past year in Jordan has changed me.  To know poverty and wealth exist is one thing.  However, to live amongst it on a daily basis is quite another thing.  I hope that I am now more compassionate and understanding.  I’m unquestionably more grateful for my life and my blessings.  And I will forever be grateful for these experiences my family is having.