I recently started a new job.  Jason took this picture of me on my first day of work; much like we take pictures of our kids on the first day of school. 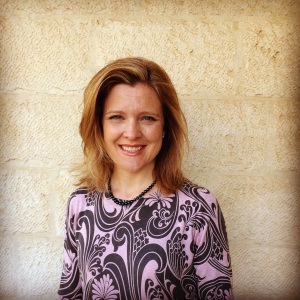 I work in the political section of the embassy.  My job title is Human Rights Vetting Assistant.  Though my position is only part time, this is my first job outside the home in 18 years.  You heard it right–18 years.  Since the birth of my oldest daughter.

The political section at Embassy Amman is full of a bunch of hard-core diplomats.  These people are smart.  Half the time I sit in meetings and have no idea what anyone is talking about.  Some days I swear they are speaking Russian.  State Department peeps use a lot of acronyms.  For one who has no idea what 99% of the acronyms stand for, it seems like they are speaking a foreign language.  I spend a lot of time feeling really dumb.

I feel dumb just trying to get into my office.  Security at our embassy is such that I have had to memorize four different numerical codes which I have to enter at various locations around the embassy before I can even enter my office.  How am I supposed to remember all those numbers?  18 years of motherhood has scrambled my brain to the point where I can’t remember my own blood-type.  I’m reminded of the first week of junior high when I lost sleep over my continual fear that I would forget my locker combination.  Yesterday, at the last code location, I missed the time limit to enter the code, triggering a loud alarm.  I fully expected a contingency of Marines to rush in, tackle me to the ground and hold me there until I recited the Pledge of Allegiance backward and named the last ten winners of the World Series, in order.  Surprisingly, no Marines rushed in.  Instead, a colleague arrived right then, turned off the alarm and all was well.  I then sheepishly called the Marines at Post One, told them who I was and where I was.  Then I apologized for tripping the alarm.  Frankly, they didn’t seem to really care.  But I felt really dumb.

As for my actual job, I received basically no training.  The woman I replaced left post about a month before I started, so I have never actually spoken to her about the position.  I received about 15 minutes training from a temp.  So, by and large, I have had to figure things out on my own.

And I think I may have screwed up a couple of times.

So today, though it’s the weekend, I snuck over to the embassy to check the status of a vetting case I’ve been stewing over.  And, SUCCESS!  I received word from DC that the case was cleared.  I didn’t screw up after all!

For those of you who have been in the work force for all of your adult lives, I know this sounds pretty unimportant.  My husband is continually telling me to stop fretting over all this.  But I can’t help it.  Because I have been a housewife for the past 18 years, I feel like I now have something to prove.  I can contribute.  I can produce.  I can be successful.

And making peanut butter sandwiches isn’t my only skill.